The product immediately grabbed our attention for its specifications. It is certainly a must try for all those who are on the hunt for some of the thinnest condoms in the world.

Sales are starting on 18th of November 2013, but only in Tokyo, while the rest of the world will have to wait till they expand their production capacity.

Condom-sizes.org team was lucky enough to receive a few exclusive samples of these new unbelievably thin condoms. We took some photos and one of our readers/supporters got two testing samples. Below we’ll write a bit more about our impressions of Sagami Original 0.01.
First, lets take a look at the specifications. 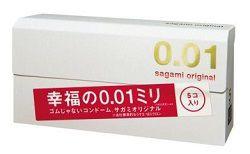 As you can judge by its dimensions this condom would best suit those who usually use a regular or a smaller sized condom. The nominal width is actually a bit wider than a regular latex condom width, but keep in mind that polyurethane (which this condom is made of) is less strechable than latex. So the tightness and constricting feeling might be even more evident in the case of a misfit size.
Although its less strechable that doesn’t mean it’s less reliable. The Sagami safety standards are ensuring the reliability and security of each polyurethane condom they produce. Intrigued by its thickness I used some force to strech it as far as it goes but it stayed in one piece.

Each sample condom came in a neat little paper box, and you can see below how it looks after opening it:

Here’s how it looks upclose after unwraping the foil on the top (right side, of course). I placed the Okamoto Skinless Skin condom on the left, which has a thickness of 0.047mm, for comparisson. You obviously don’t need a microscope to see the difference – Sagami is so much thinner!

On the first look this condom is so thin and fragile that some might be a bit sceptical in its durability. It proved it self in practical use however, as our reader confirmed.

You know that usual smell of a latex condom? Well this condom has no smell at all and I think you’ll agree that’s a neat feature of a polyurethane condom. On the other hand the extreme thinness and the fact it’s less strechable makes it a bit harder to unroll.